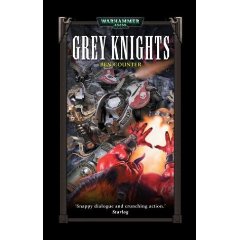 Ben Counter starts off his new Warhammer 40,000-based series with a bang. Already known for his excellent Soul Drinkers series set in the same universe, Counter introduces his readers to a new fighting unit called the Grey Knights Chapter. This fighting unit would be considered the elite of elites. They’re Space Marines just like the Soul Drinkers Chapter in his other series, but they’re training, fighting prowess and mission directive puts them even above the other Space Marine Chapters. Grey Knights act as daemonhunters for the Imperium and as such they’re seconded to the Inquistorial Order that deals with all things daemonic and Chaos: the Ordo Malleus.